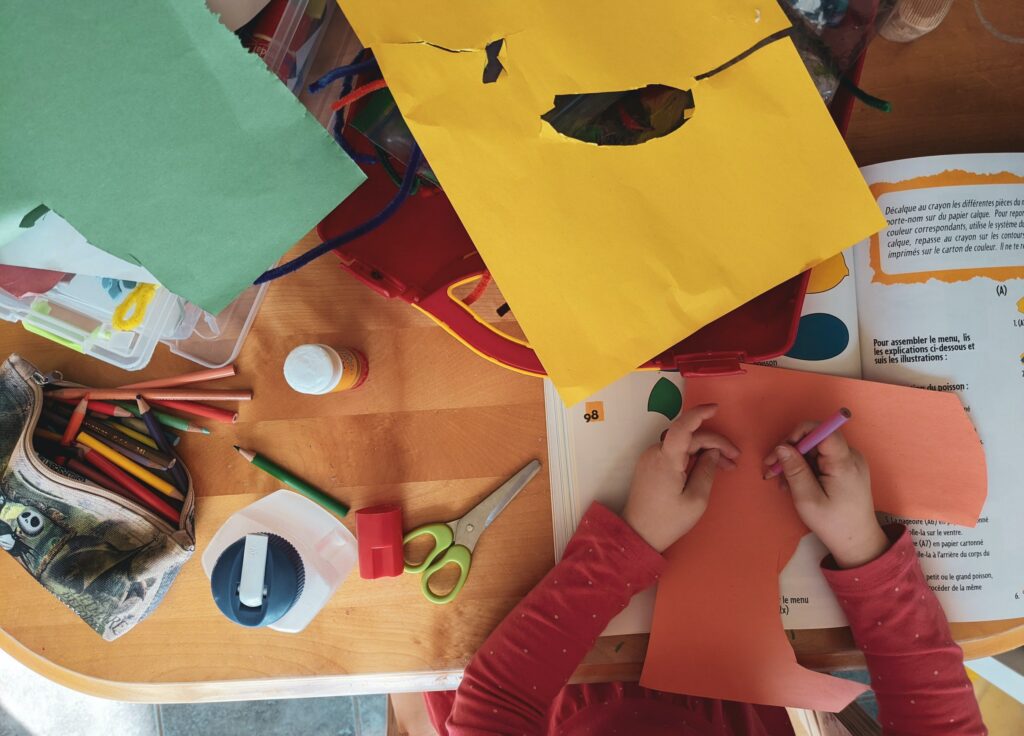 Wooden tongue depressors. Elmer’s Glue. Glitter. Construction paper. Safety scissors with blue handles. Dried macaroni product. A very scary precision paper cutter that looked like a machete attached to a chess board. And for some reason, a shocking amount of dried pinto beans.

These were the affiliated trappings of what my elementary student brain came to know as ‘craft.’ Whether chains of paper to decorate the classroom terrarium during the holidays, or homemade Mother’s Day cards fashioned out of dried pasta…craft meant it was time ‘to make something.’

In these hours with fingers smeared in water soluble marker, glitter on our cheeks, and some unruly lefty complaining about the ergonomics of right-handed scissors, we discovered something profound: the grief of failure, the allure of creativity, the necessity of innovation, and a general comfortability with the messiness involved in endeavoring to make something.

Even though most of it was at best, not very good, and at worst…nightmare inducing constructions of prepubescent imaginations…a nuance emerged from all that terrible messiness that I think has become far too easy to forget. And that is, for most, the crumbled pieces of construction paper or flecks of dried glue that we brought home at the end of the day, a parent half-heartedly placing them on the refrigerator door…that wasn’t really the point at all.

Craft is an approach and a mindset. It is not like other forms of work. It’s not an end-result, but rather as Miley Cyrus so presciently taught us…it really is the climb. At LOCAL we believe that craft is not a noun, but a verb, and if you focus too hard on incentivizing the results, you’ll betray the spirit of craft that inspired you to make something in the first place.

And the science says it’s even worse…an intense focus on the outcome and related incentives actually suppresses creative thinking and problem solving so necessary to good crafts(wo)manship. When you attach the burden of impact to the creative process, you diminish the opportunity for people to tap into their purpose and imaginations. This is what Dan Pink discovered in his now famous Ted Talk on The Puzzle of Motivation:

“There is a mismatch between what science knows and what business does. Here is what science knows... Those 20th century rewards, those motivators we think are a natural part of business, do work, but only in a surprisingly narrow band of circumstances. Those if-then rewards often destroy creativity. The secret to high performance isn’t rewards and punishments, but that unseen intrinsic drive — the drive to do things for their own sake. The drive to do things because they matter.”

We can’t control the outcome of our creativity. And I really wish we could. It would make my job a lot easier. Just automate it. But craft is human. And this is how it works. Them’s the breaks. We can only seek to make the thing and stand in wonder — and make sure you’re sitting down, business folks — with pure surprise, and occasional disappointment, at what the deft touch of human hands and imagination can come up with.

If I can indulge the hubris to add one more pillar to Mr. Pink’s elegant frame…it would be courage. Let’s have the courage this year to swim into the deep end of the pool. The courage to walk out into a space without certainty of what’s to come. The courage to rediscover the alchemy of transforming sticks and glue into something magical. The courage to get a little messy. Because if we do…I think we can craft some really cool stuff.